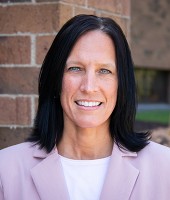 Director Moll came to Ohio State from Bowling Green State University where she had served as Director of Public Safety and Chief of Police for six years. At BGSU she was responsible for the direction of the BGSU Police Department, the Office of Emergency Management, Parking Services and Shuttle Services.

Prior joining BGSU, Director Moll was a Lieutenant in the Kent State University Police Department. During her 14 years at KSU she served as shift commander, CIT officer, crisis negotiator for the Metro SWAT Team, community policing liaison, basic police academy instructor, and investigator. She also taught undergraduate policing courses as an adjunct professor.

Director Moll completed her undergraduate degree in Social Work at The University of Akron. She has both a Master of Public Administration degree and a Ph.D. in Political Science from Kent State University. Director Moll is also a graduate of the Police Executive Leadership College, the Certified Law Enforcement Executive Program, and the 238th session of the FBI National Academy.