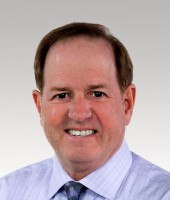 Tom has led public media organizations for more than 30 years. He worked in commercial television as a reporter, before leaving broadcasting to seek an advanced degree. In 1989, Tom moved to the University of Alabama to direct the Center for Public Television & Radio.  His efforts led to a series of notable documentaries on the state of Alabama and an expanded presence for public radio. Tom was a key player in the purchase of a commercial television station to serve the community of Tuscaloosa and the university.

In 2002, this background led to his recruitment for the position at Ohio State as General Manager of WOSU Public Media. Tom directs the public broadcast and growing online and mobile presence in service to more than 2.5 million citizens in central and southern Ohio. WOSU has more than 60 full-time staff and a $10 million annual operating budget.

Tom has been focused on expanding local programming, building a strong fundraising organization, and growing WOSU’s presence in the Columbus community. In 2006, WOSU unveiled its new digital television studios in the COSI Science Center. The facility includes the largest studio in the city, public space for forums, production suites, a media lab for teens, and popular exhibit space developed with support from Sesame Workshop.  WOSU-TV programming regularly wins Emmy awards, while 89.7 NPR News has consistently been named the best radio new operation in Ohio. Classical 101 has been touted as the rare all-day classical radio station with hosts who showcase local performing arts.

WOSU serves as an extension of Ohio State’s land-grant mission to serve communities across Ohio. The stations tell the stories behind the research on campus through faculty interviews and profiles. WOSU broadcasts every Ohio State Commencement and assists the university as the designated emergency broadcast facility for the campus. The organization commits funds every year to developing Ohio State students as journalists and producers.