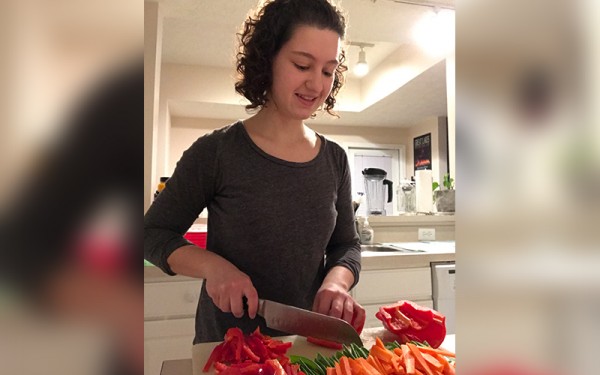 With seven members of the immediate family, the Schneiders rarely ever ate out, instead choosing to prepare their meals at home. Much of those duties fell on Meg, who was the cooking companion to her father throughout her teenage years.

“In high school, my dad gave me his credit card, so every day after school I could go to the store and buy dinner ingredients,” Meg said. “I’d come back, and my dad and I would cook it. I had a good foundation at a young age.”

Meg had a strong grasp on the grub she ingested, which always involved a vegetable and protein of her choosing. That control changed once it was time to go off to college.

In the fall of 2010, Meg entered Kent State University as a freshman. Living in the dorms and eating off a meal plan, Meg lost the control she once had on her diet.

“The meal plan was not great. A lot of it was frozen food that was soggy. The residence halls didn’t have pots or pans. You could make microwavable mac and cheese or eat in the dining halls.”

The demanding class schedule of an ambitious college student didn’t help either.

“All my classes were three hours long, so I was always on the run to get my work and projects done. If I was pulling an all-nighter, which happened quite often, I definitely relied on energy drinks to keep me awake.”

The fuel she was feeding herself was causing the body to break down.

“I did notice I got sick a lot more often. Always had a cold. I’d get strep throat every year, which one time turned into walking pneumonia. It was a poor immune system. Some of it was the stress of college, but the food didn’t help either.”

In the winter of 2014, Meg received her Bachelor of Fine Arts degree in Visual Communication Design. Her education provided her with the opportunity to move to Cleveland to start a job at WTWH Media as a graphic designer. She moved into a one bedroom apartment, which for the first time since high school gave her exclusive access to a full kitchen.

“It was nice. My own kitchen, I actually could cook again.”

Now in Columbus, some of her most common meals are Mexican dishes with natural ingredients.

“I use rice, bean and avocados. The difference between mine and the restaurants is I use a lot less salt and go without cheese and sour cream. I also replace the butter with olive oil, which is a lot healthier.”

She also cooks stir fry, chickpea tikka masala and lentil soup. By preparing these meals herself, Meg avoids the unwanted preservatives. She believes food her way has her body back in a healthy condition.

“Before I was constantly having a cold. Now I might start feeling like I’m getting a cold, but I don’t get it. I also have more energy. It has dramatically changed since I’ve been able to cook again.”

Meg estimates she might eat out once a month, preferring absolute authority over what she uses to amuse her appetite.

“I feel healthier now. I feel fit. As long as I feel good, I’m going to keep eating this way. It’s like a car, if you fill diesel in a non-diesel car, the performance is going to suffer. Same thing goes with us and food. That’s why I take it seriously.”