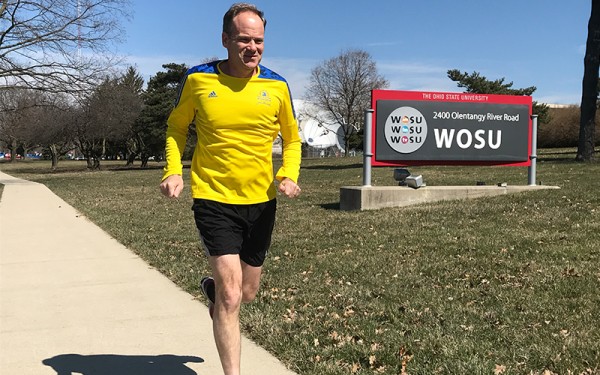 Mike Thompson, Chief Content Director for News and Public Affairs at WOSU Public Media, might best be known for his role as host of “Columbus on the Record,” a weekly half-hour television talk show dedicated to Ohio politics on WOSU-TV. Not commonly discussed on the record, Mike’s dedication as a long-distance runner.

“I just like it because it’s my time,” Mike said. “I’ve lost 30 pounds. I sleep better. It helps with stress big time.”

Running was life for Mike, until it wasn’t.

Growing up in Worcester, Massachusetts, Mike first got involved with running in high school.

“Freshman year, I got cut from the soccer team during tryouts. A buddy of mine said, let’s go out for the track team. I just liked it. I made good friends, kept doing it and got better.”

Mike got good enough to be accepted onto the Syracuse University Cross Country and Track and Field teams as a walk-on. His races were anywhere from 3000 meters to 10,000 meters (1.8 miles to 6.2 miles).

After college, Mike set his sights on longer distances.

“Growing up in Boston, I always wanted to run the Boston Marathon.”

But that never happened. Mike got married and later he and his wife brought twins into the world.

In spring 2014 at the age of 48, Mike needed to get back into shape. He and his son Will, who was a Boy Scout, were about to go on a 12-day hiking trip in Philmont, New Mexico.

So Mike prepared the best way he knew how. He laced up his dust-covered running shoes, starting off with 2- to 3-mile runs around his neighborhood. His training got him up to 5- to 7-miles, making him confident enough to take the trip.

“The trip came and went and I said I’m in shape now, I’m not going to waste it, let’s keep going.”

And that’s what Mike did. In the summer of 2014, he ran his first half marathon, crossing the finish line in Dublin, Ohio.

“It felt good, so I said I’m going to keep going and finally do a marathon.”

Mike completed his long-time goal, running the 26.2-mile race in Columbus in October 2014.

“It was pretty cool. I had run the time I wanted. It was great achievement to do it.”

Since that first marathon, Mike has run five more in Columbus, Toledo, Chicago, the Twin Cities and in 2016 he completed his hometown race, the Boston Marathon.

“That one was special,” Mike said of the Boston Marathon.

This April, Mike plans to run his seventh marathon, once again in Boston.

It’s his training regimen and good bill of health have allowed Mike to reach beyond his running goals. When working towards a marathon, he runs six days a week, often playing WOSU radio or Boston Sports Talk radio in his headphones. Some of those runs occur during his lunch break. On those days, Mike brings in his old raggedy gym bag, with a fresh pair of running shorts, a shirt and his red running shoes. When he comes back to work covered in sweat, he’s able to use the shower inside the locker room tucked in the corner of the basement of the Fawcett Center.

“I didn’t know there was a shower back there for the first 10 or 12 years that I worked here. I think it’s for the hotel kitchen staff. I asked if I could use it, so now I just throw my stuff back there.”

The only weather that keeps Mike from completing his runs is extreme heat in the summer or an ice-covered ground in the winter.

“As long as you’re dressed well, you’re good. I ran four years in Syracuse, New York. We’d get 75 inches of snow a year. It takes a lot for me to cancel.”

His plan is to complete 10 marathons and reevaluate from there. Mike admits, at 51 years old he might have to pull back a bit from his aggressive schedule, which has had him running two marathons a year for the past three years.

“It’s been a grind, but I’ve enjoyed the benefits and the camaraderie of running. I feel better. My wife says I snore less. It’s part of my routine. It’s like mowing the lawn, I just do it.”

And as his track record shows, he’ll keep doing it as long as time allows.

Are you looking to improve your health? Visit yp4h.osu.edu(link is external) to learn more about the university's Your Plan for Health program.