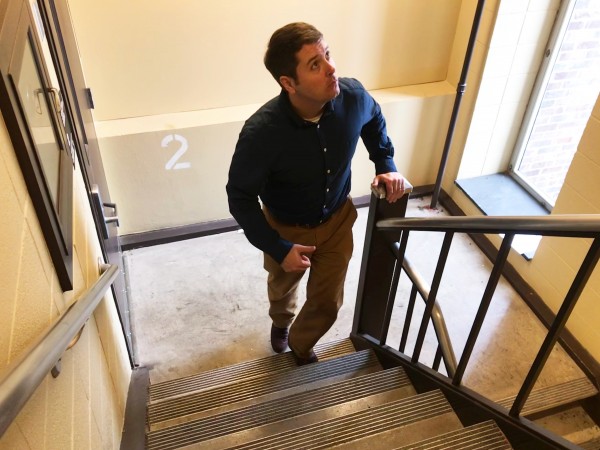 For 10 years, Eric French has worked as a Broadcast Technician for WOSU Public Media. In the basement of the Fawcett Center, French works to ensure all of the equipment functions, an imperative role for the 24-hour multimedia organization that consists of more than 70 people.

To be effective in his role, the technician also needs to be sure the mechanics of his body are working right.

French never has considered himself overweight or unhealthy. He was an athlete growing up and still catches 25 games a year in the Columbus Men’s Senior Baseball League, but like anyone that works at a desk, hours of sitting can take its toll.

“A couple years ago, I was looking for something to do to take breaks during my work day to get away from a computer screen, to not sit in a computer chair,” French said.

“I realized, well, we have a 13-floor set of stairs here [in the Fawcett Center]. Why not just march up and down?”

French never really had a need for the stairs or the elevator in the building because the parking lot door leads rights to his work floor. But one day in late 2015, wearing his button-up shirt, dress pants and work shoes, French found the stairwell and started walking up.

Soon, the summit became a little more simple, and the trips to the top, more frequent.

It was during the summer of 2016 when he found a fellow climber.

“I think we were doing it simultaneously, but we just didn’t know,” WOSU Public Media promo producer Chris Donnelly said.

Climbing the stairs had been a regular ritual for Donnelly for a couple years.

“I got started because of stress, and it’s helped tremendously. I notice myself with less stress afterward or if I am feeling stressed, climbing the stairs actually helps relieve that pressure that’s on me,” Donnelly said.

This was when the coworkers became climbing companions.

“When we started, we were out of breath for a minute or so, but it got to the point where we were breathing easier.  Then for a while, we started doing it two-to-three times a day, meeting up at different points,” Donnelly said.

“We’re not going at a breakneck pace, we’re just kind of walking. It’s short and intense. It takes only about five minutes up and down, and it’s energizing. It definitely sharpens my focus,” French said.

It is now a regular tool that both French and Donnelly use enhance their effectiveness in the workplace.

“The weirdest part for me was being out of breath and passing people on the stairs. It takes being ok with being awkward at work. Once I got past that I was just like eh, who cares,” French said.

In the warm months, the frequency of the workout declines as the heat inside the stairwell rises. Soon though, it will be back to stepping season.

“Doing it once makes me want to keep doing it over and over. It keeps me motivated to want to work hard,” French said.

“It’s a small footprint out of the day. It’s all about using your environment to keep fit,” Donnelly said.