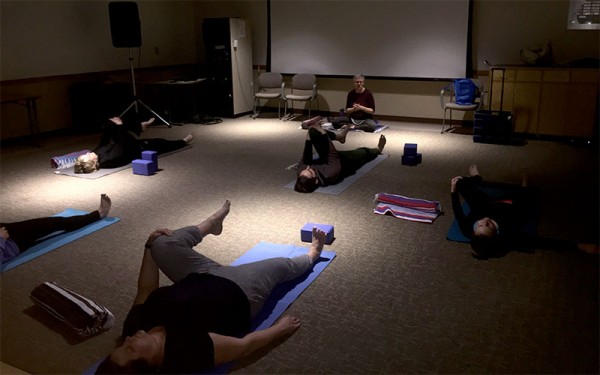 We’ve all thought at one point or another that we would exercise more if we had more time. Now, two WOSU staff members have started an exercise program that covets convenience.

Cindy Gaillard, Director of Local Content, and Ann Fisher, Executive Producer and Host of “All Sides with Ann Fisher,” launched the program in October.

Fisher came up with the idea after connecting with a voice coach from NPR. “We worked on breathing techniques and we did a lot of yoga-type moves during the session,” Fisher said.

So, she ran with the idea, asking the staff on Facebook if anyone would be interested. Gaillard got involved and reached out to Mary Coleman, who teaches yoga in Dublin.

“She’s the right fit for exactly what we need,” Gaillard said. “She’s the right personality and willing to come to us on a weekly basis. If we say all of us are completely stressed out or we just need a little relaxation, she’s got just the exercise.”

Classes started in late October and take place on Wednesdays, except for when WOSU has breaking news.

Between five to seven people regularly attend the one-hour session.

“I think for all of us it’s a great break in the day,” Gaillard said. “We have such high-pressure jobs that it’s great to just slow down and breathe and just take a meditative hour to work a little bit on our muscles.

Fisher added: “It’s just the philosophy of yoga and the mindfulness of it. In journalism, you’re always trying to think two steps ahead. It helps you reset at a critical point of the week.”

Organizers are now considering opening it up to all Administration and Planning employees.

If you’re a WOSU employee and are interested in taking part in the yoga class, you can visit the staff Facebook page and respond to the yoga posts.