Keep up with the LGBTQ Initiatives through the Multicultural Center. Learn about signature events, student support, leadership development, educational programs, and more. Many events qualify toward DICE certification. More .

Nov. 17 - 6 p.m.
The Muslim Student Association invites people of all faiths to fast from sunrise to sunset Friday to stand in solidarity for food security across the globe. Fast-A-Thon, the group’s annual charity banquet, will feature a variety of discussions centering around food security, and attendees will break their fasts together with an authentic Middle Eastern dinner provided by Lavash Cafe in Clintonville. This event counts toward DICE certification. More . 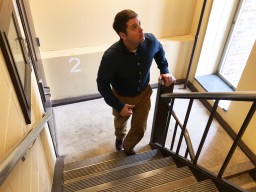 For 10 years, Eric French has worked as a Broadcast Technician for WOSU Public Media. In the basement of the Fawcett Center, French works to ensure all of the equipment functions, an imperative role for the 24-hour multimedia organization that consists of more than 70 people.

To be effective in his role, the technician also needs to be sure the mechanics of his body are working right.

French never has considered himself overweight or unhealthy. He was an athlete growing up and still catches 25 games a year in the Columbus Men’s Senior Baseball League, but like anyone...

Nov 16 - noon to 1:30 p.m. - 105 Biomedical Research Tower
Matinees that Matter is a monthly purposeful lunch-and-learn program with video and discussion. "Trails of Tears" explores the resolve and resilience of the Cherokee people who resisted removal from their homelands in the Southeast in every way the knew. This event counts toward DICE certification. Register .

Take Back the Night

Nov 27 - 6 p.m. to 7:30 p.m. - Student Life Multicultural Center
Do you have a desire to raise awareness about the problem of sexual violence in all forms, show support for survivors, and take a visible stand against the problem? Then Women Student Initiatives (WSI) invites you to become a member of the Take Back the Night Event (TBTN) Planning Committee. TBTN has held events around the workd since the 1970s and is a sign of empowerment, hope, and healing for all of those who have been hurt. This event counts toward DICE certification. Questions ....

Nov 9 - 10:30 a.m. - Bricker Hall, South Entrance
You are invited to attend the Annual Rock Ceremony honoring Ohio State alumni who lost their lives in service of their country as members of the armed forces. The Ohio State tradition began on November 11, 1919 to commemorate the armistice signed on November 11, 1918, ending World War I. This event counts toward DICE certification. 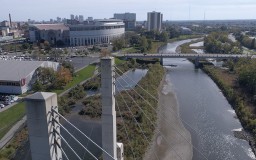 We Have Liftoff - Capturing Drone Footage

It’s not a bird, or a plane – it’s a drone. A&P Communications is now FAA-certified and able to capture aerial photos and videos of our campus landmarks and key construction projects. Take a look at some of the stunning shots this aircraft can capture. Interested in a birds-eye view of your project? Contact Jon Griffith .

Video of We Have Liftoff

Nov 1 - 4 p.m. - Faculty Club's Grand Lounge
Myths and rumors obscure the real truth of the Amish, one of the fastest-growing religious groups in U.S. society. Join Emeritus Professor Joseph Donnermeyer and the Emeritus Academy for this discussion. This event counts toward DICE certification. More . Contact .

This professor emeritus may be best known for his beautiful photographs, but the tiny stories he’s authored about his family, life in his native Cuba, and more touch the heart as well. Tony Mendoza’s work is in many esteemed collections, including that of the Museum of Modern Art in New York. Here are some images and tales from his upcoming book, aptly titled "Pictures with Stories ." This event qualifies toward DICE certification. More .