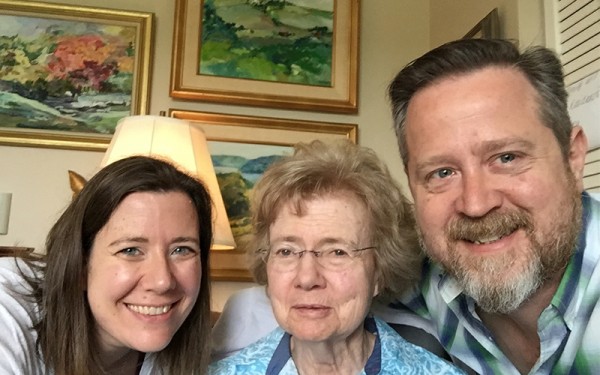 “She was using painting to help cope. Besides being her passion, the focused brushstrokes helped reduce the tremors and other symptoms.”

Pam was diagnosed with Parkinson’s in 2006. At the time, Hannah’s career had her living in Chicago, while her mother was in Columbus.

“When it’s somebody like your parent, you know them as the strong one taking care of you. This was a complete reversal and that was tough.”

Hannah did her best to support with frequent visits back home. She also learned as much as she could about the disease to help her mom navigate through this difficult time.

“It’s a devastating disease. She started off with small tremors, but then it increased to constant movement delays and balance issues. It created an extra fumble to everything from walking to holding a fork or even buttoning a shirt.”

In 2011, five years into Pam’s battle, the disease started to advance more aggressively. She could no longer drive or live alone, so she was enrolled in assisted living.

“This is when I realized I needed to be more involved,” Hannah said. “When you see firsthand what the disease does, just getting active was a no-brainer. I wanted to immediately start doing what I could and getting involved in different ways.”

Hannah joined a group called the Chicago Professionals for Parkinson’s Research and helped the team organize events that raised money for Parkinson’s research through the Michael J. Fox Foundation. Aside from helping her mother, this was how Hannah contributed to the fight, until 2017. Pam was not doing well and Hannah realized she needed to find a way to move closer to her mother. The opportunity came in March 2017, when Hannah was hired as a Project Manager in Planning and Real Estate at Ohio State. Only six months later, Pam passed away.

“I’m forever grateful I had that time.”

Since her mother died, Hannah had been looking for a way to get back involved in the fight against the disease. Ohio State’s “Day of Giving” on February 28, 2018 provided that chance. Hannah searched for a fund that supported Parkinson’s Disease research and that’s where her story took an interesting twist. The search resulted in a fund called the Powers Family Support Fund in Parkinson’s Disease Fund #645891, established by James A. Powers and Anne K. Powers. Anne Powers happens to be Hannah’s godmother who was also diagnosed with Parkinson’s. Anne is still fighting through the disease today.

Hannah never knew her godmother had created a fund to support Parkinson’s Disease research, so when her search revealed the fund with the Powers name, Hannah knew it was the perfect opportunity to contribute.

“That made my decision for me. My godmother’s name is on the fund, I have to support.”

While the money raised cannot bring those back who have been lost to Parkinson’s, Hannah knows research might help other families avoid what her family experienced with the passing of her mother.

“There are medical advancements every day with the research. The more that you can give, the better chance we have at finding answers,” Hannah said.

“Whatever amount of money I can donate at the time, if it will help further research or help a family handle the situation better, that’s what I’m going to do because I know I valued it when I was going through it with my mom. To contribute while supporting my godmother, who has meant a lot to me during the years, it’s a bonus.”